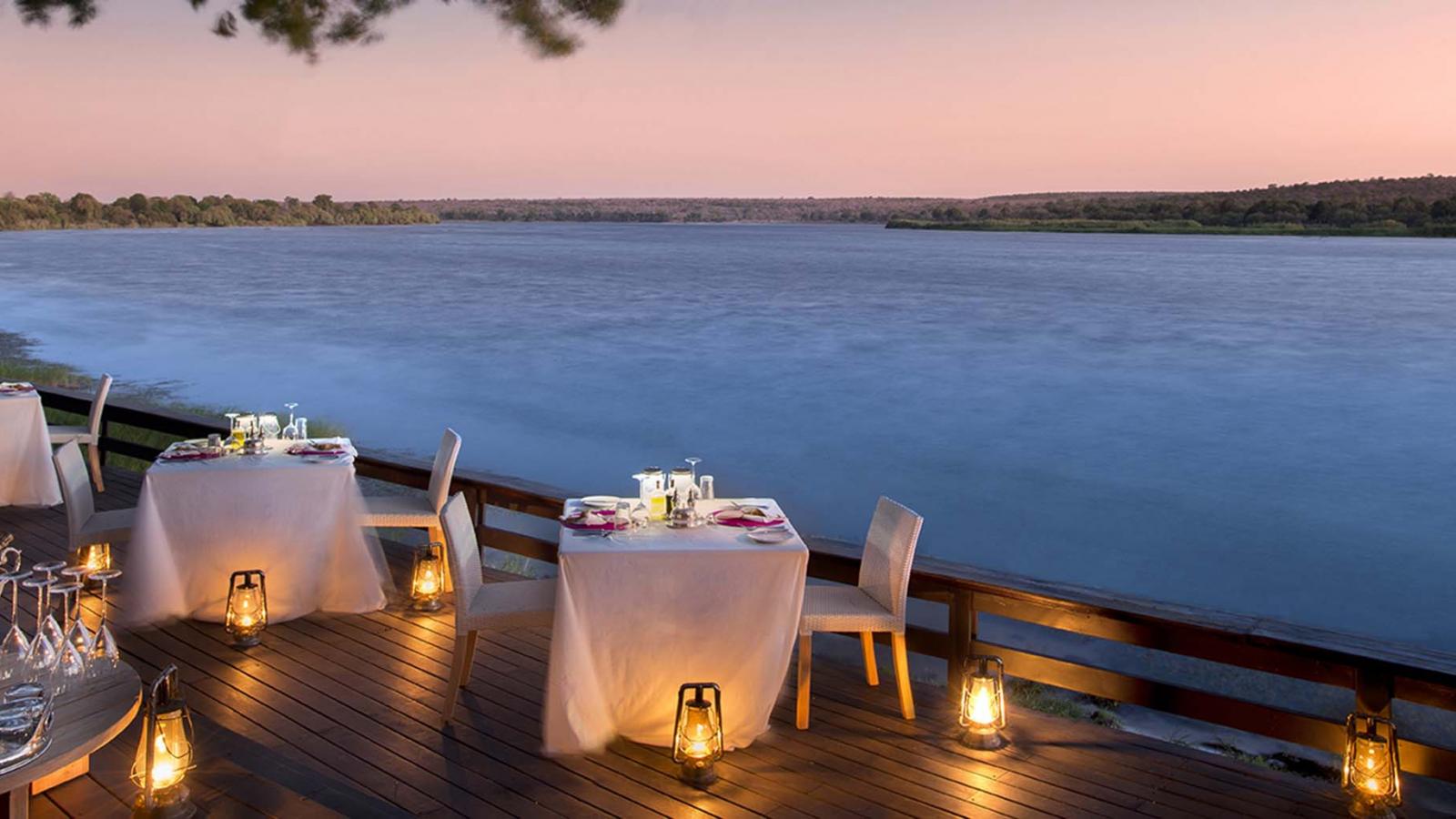 I had been looking forward to experiencing Royal Chundu, near Victoria Falls, ever since I started at cazenove+loyd. Whenever I had to source some photos for it, I had always sat and daydreamed about what it would be like to stay there. And then suddenly I was there, not daydreaming, but actually there…

I had been looking forward to experiencing Royal Chundu, near Victoria Falls, ever since I started at cazenove+loyd. Whenever I had to source some photos for it, I had always sat and daydreamed about what it would be like to stay there. And then suddenly there I was, not daydreaming, but actually there…

Royal Chundu, one of our favourite Zambian retreats, is split into two parts – River Lodge and Island Lodge. The former is more pared down, while the latter is all-out luxury.

Having pulled off the main road between Livingstone and Botswana, we ambled for 10 minutes down a dirt track, before rounding a corner to see the helipad and, on the other side of it, the entrance to the River Lodge. I was met by a big smile and firm handshake by Hessah, the general manager. Like many who work at the lodge, he had moved his way up through the ranks and now oversaw the whole set-up. He led me down the wide entrance corridor and into the main area; to my right was the bar, to my left, the pool and straight ahead, the mighty Zambezi. Impressive.

While I sat checking in, sipping my ginger-infused welcome drink and receiving a neck rub, Hessah explained to me that because of a refurbishment of River Lodge, they had organised for me to stay at the sumptuous Island Lodge. This was a short 15-minute gentle cruise down the river. So with check in, drink and neck rub finished, I made my way down to the jetty, where my boat awaited me. Hessah joined me and took me through a few things, such as the activities on offer, as we made our way to my next Zambian home. I was also introduced to the boat’s driver, SK, who was also to be my guide for the next 24 hours.

On arrival at Island Lodge, Hessah took me up the stairs, where a walkway sort of ‘spiderwebbed’ at the top. To my left was the main area with a bar, restaurant, library and small pool; ahead was my room/chalet/castle. Hessah left me in the room and said that he would find me later. On saying my thanks and goodbyes, I shut the door behind him and couldn’t help but let out a little smirk and have a quick ogle at the palatial room again, letting it sink in that this was all mine for the next day.

For the afternoon, I didn’t have anything planned so I returned to my room for a siesta. The lodge does offer plenty of activities if one wants, visiting Victoria Falls, fishing, kayaking – the list goes on. However, I was more than happy to just enjoy my room and the peace and quiet of the balcony. When I awoke, I spotted in a nearby tree, no more than 10ft away, a giant kingfisher. I managed to take lots of photos of it while it was eyeing up fish in the river below. This was one of many of the kingfishers I saw during my time at Royal Chundu, making it a fabulous place for the avid birder.

Later in the afternoon, with dusk lingering in the air, I made my way down to where the boat had dropped me off for my river sundowners. I was joined by a couple who were the only other guests on the island, and we set off down the river to catch the sunset, my last in Zambia. The boat had been stocked with lots of snacks – from original African beef jerky to dried herring – and drinks ranged from white wine and beers to speciality gin and tonics. I opted for a craft G&T from South Africa.

The sunset was stunning, as they so often are in Africa, as we bobbed along the Zambezi spotting crocodiles on the banks, as well as waterbuck and baboons, careful to give the crocs a wide berth. We made it back to the lodge just as it was becoming dark and I made my way back to my room where a surprise awaited me…

As I turned the lights on in my room, I noticed that the lanterns had been lit around the bathtub end of the balcony. On closer inspection, I could see that the bath had been filled and was bursting with bubbles. Fantastic! How often do you get to sit in a bathtub full of bubbles next to the Zambezi? I sat there and listened to the sounds of the river for about half an hour before I decided to get out and change for dinner. Dinner was delicious. Emmanuel, the head waiter, had said, “We propose the seven-course taster menu,” and, well, when in Zambia…

In the morning, I was very excited to do some tiger-fishing as it had been a long time since I had held a fishing rod. I made my way across the spiderweb of walkways and down to the jetty, where SK was awaiting me with a boat and fishing rods – a spare in case I dropped one. There was also a little silver tray upon which sat tea and coffee in case I wanted it. It was now about 6.45am and the big African sun was starting to rise – and with it the temperature – but it was cool on the boat with the breeze, so we buzzed around happily ‘trawling’ the fishing line.

It wasn’t too long before I caught my first tiger fish. I instantly saw where they get their name from; their mouths are full of razor-sharp teeth and the fish are known to eat baby crocodiles. It wasn’t too much of a fight to get it on board, but what was tricky was trying to do everything that SK was telling me to amid the excitement of catching my first fish in I don’t know how many years.

In all, I was out on the river for about two hours and caught half that number of fish. Nonetheless, it was a great way to start the day, and after all, what an amazing place to go fishing. It was also a good way to (sort of) work up an appetite, and I needed to if I were to face the enormous amount of food coming my way at breakfast.

Once I had been dropped off back at the lodge, I boarded another boat back up to River Lodge, where I would jump in the back of a 4WD and be driven around 15 minutes, through local villages, to a spot on the banks of a tributary river. Awaiting me was two small, inflatable kayaks. One for me and SK, and one for two other guides.

This rhythm of smooth water, then rapids, repeated itself over about 45 minutes to an hour. The river was narrowing and the vegetation thickening, making it all seem quite adventurous. And now with more of an appetite worked up, we rounded a corner, where Emmanuel (the head waiter again) came into view on the bank and we rowed over until we were right next to him. I was instructed to hop out, and SK and the other two guides joined.

At River Lodge, a bush breakfast or lunch once during your stay is included in the cost, and it is very special. After stepping off the boat, Emmanuel led me up the bank to a tray hanging from a tree, on which sat a Mimosa for me. He then introduced me to the chef who was on the other side of a large kitchen surface, tending to bacon and sausages on an almost open fire. I demolished platefuls of frittata, poached eggs, freshly baked croissants stuffed with ham and cheese, and so much fresh fruit too.

I then had a couple of hours before my time at Royal Chundu was to come to an end, so I sat on my balcony and tried to soak in my surroundings as much as possible. From the noises of the birds and the bugs to the views of the river, I had finished an amazing Zambian adventure at the most fantastic place.

Royal Chundu was an incredible experience and it lived up to everything I had imagined it to be. I was so well looked after, and in a place that was so well situated, the whole 24 hours will remain in my memory for many years to come. If anybody finds themselves in that part of the world with the budget, or wanting to see Victoria Falls, a stay at Royal Chundu is a must.