Walking in the Ngorongoro Highlands 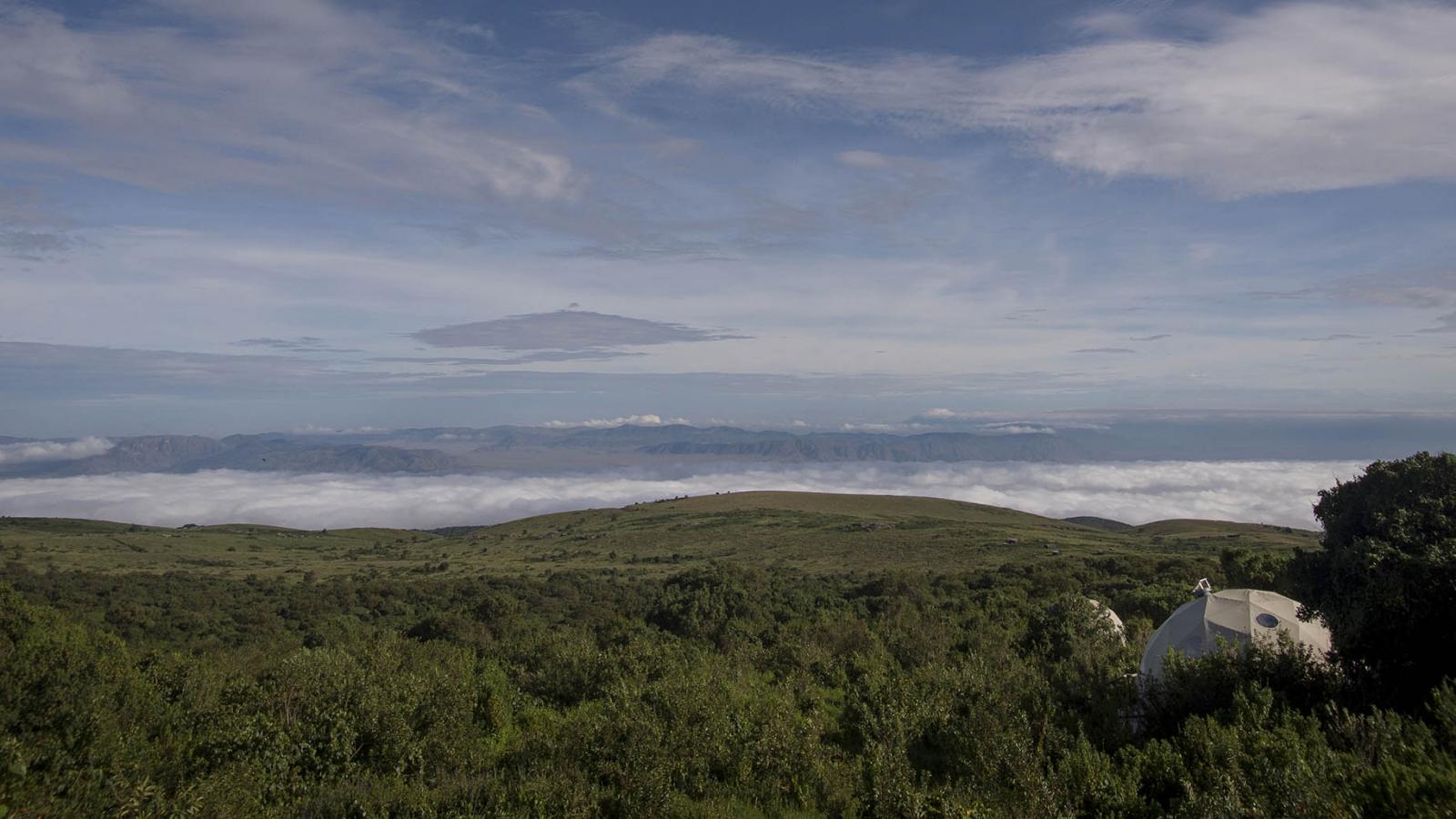 People often travel to the Ngorongoro Conservation Area (NCA) as part of their journey in northern Tanzania – but most only spend a few days at the famous Ngorongoro Crater before moving on to the Serengeti. However, we believe it is well worth taking the time to head off the beaten track into the nearby highlands, where there are two other beautiful calderas that are far less visited: Olmoti and Empakaai.

Exploring the Ngorongoro Highlands on foot makes a wonderful break from back-to-back game drives and reveals a whole new landscape of undulating, emerald hills specked with Maasai herdsmen bedecked in ruby-red, grazing livestock and bomas. If you enjoy hiking, are interested in Maasai culture and would like to get off the beaten track, we can arrange for you to spend a couple of days here, using The Highlands, a stylish, contemporary and comfortable camp, as your base.

Two of our favourite walks are a descent into the Empakaai Crater and an ascent of the Olmoti Volcano. Both of these remote wilderness trails are relatively untrodden and you are unlikely to meet any other tourists along the path.

This stunning, often forgotten caldera lies 40km north-east of its famous neighbour, Ngorongoro. The one-hour drive there is in itself spectacular. Awestruck, we traversed the rolling grasslands of the Embulbul Depression, where sheep, goats and cattle graze, carefully safeguarded by colourfully clad Maasais. We passed golden jackals roaming the lands on the hunt for mice, mole rats or straying livestock. In the distance, a mystical, faded-blue mountain loomed, shrouded in mist: Ol Doinyo Lengai (or ‘Mountain of God’). This active volcano is a sacred place, climbed by Maasais to pray and make sacrifices at the summit.

At the rim of the Empakaai Crater, the car ground to a halt and we continued on foot. Rounding a bend, the ancient caldera appeared as if out of nowhere. At about 300m high and 6km wide, it was impressive, with its sapphire-blue saline lake glittering in the morning light. White salt circled the water and there were patches of pink, which turned out to be clusters of greater and lesser flamingos.

In our merry company were Baraka (meaning ‘Blessed’), a Maasai guide clothed in crimson, and an armed NCA ranger; and as we plodded down the steep, dusty path, winding through verdant greenery, Baraka pointed out signs of life along the way. We spotted hyena pug marks, fresh leopard tracks and lion paw prints, foreboding in the sand. “Elephants, leopards, bushbuck, buffalo and monkeys are also found here, due to the fresh streams that feed the lake,” Baraka enlightened us.

At times, the trail was vertiginous but we took our time, meandering along looking at flowers, such as lion’s claw, morning glory and candle bush. We also ambled through a forested area of fig trees and sodom apple bushes, where blue monkeys swung in the branches above us. Sunbirds, tropical boubous and turacos serenaded us as we went, and we could hear the melodious sound of cowbells as the Maasais brought their cattle to the nearby streams to drink.

At last, we arrived on the crater floor and approached the sparkling water. The lakeshore was coated with a shell of salt, like crisp, fresh snow, and fringed with flamingos, all preening themselves and fishing for shrimps in the shallows. They migrate between East Africa’s lakes, and on some days, there are apparently millions here. As we moved towards them, they started to circle and swirl above our heads – a pink whirlpool in the sky – before dipping down and skimming low over the water to the other side of the lake. Swifts soared overhead too in some kind of mesmerising dance display, creating a glorious spectacle.

Another memorable trek in the Ngorongoro Highlands is the ascent of the dormant Olmoti Volcano, which affords magnificent views of the Olmoti Crater, the smallest of the three. The path follows an age-old Maasai cattle trail through mountain forest, grasslands and rocky outcrops.

We were dropped by car at the foot of the volcano, from where we started our climb. Along the way, Baraka identified birds, butterflies and plants, such as wild rosemary and aloe vera. From the top, we admired the breathtaking vistas below. A flat expanse stretched before us, covered with shrubs and bushes and with the Munge River snaking through. Hundreds of cattle were moving slowly up the valley, being guided to safety by their crimson-clad Maasai protectors. “Olmoti is a good place for cattle,” Baraka explained. “During the dry months – from August to November – the community builds a temporary village near here so they can keep their animals close to the fresh water and nutritious grass of the caldera.”

We continued onwards down the other side of the volcano and into the crater itself. Leaping across a narrow tributary and into tall elephant grass, we stopped above the Munge Waterfall, which hammered down from the crater rim into the gorge beneath us. The crashing water was loud in our ears, as we observed the swallows swooping above the cascade, and spotted augur buzzards, a Verreaux’s eagle and a conspiracy of white-necked ravens.

From here, there was a magical view of the highlands below. We could see for miles. As the sun lowered in the sky, it cast a mystical, golden light across the lush landscape. It was dusk now and there was a chill in the air, so we headed down and back to the camp.